Every relationship has its tough moments. These moments don’t necessarily mean you no longer love each other. Many times common issues in relationships (such as what to spend money on, how to parent the children effectively, whose turn it is to do the housework, and so on) aren’t to blame either. Many couples struggle simply because they have not learned effective ways to communicate with each other.

Consider John and Tracey. Married for 7 years and with 3 children under 5, John and Tracey find that they fight just about all of the time-mostly over even little things. “It’s been almost a year” Tracey told me, “since we really sat down and talked. All John does now when he gets home is go to the couch and watch TV. He says it’s because he’s exhausted from work and that I nag him all the time, but I don’t know what else to do. When he get’s home I’m exhausted too from looking after our children-I need rest too. I guess sometimes I do nag him about some of the smaller issues, but we shouldn’t have to fight about everything. It’s not why we got married in the first place.”

John and Tracey are typical of many couples. Over time it is easy for communication levels to drop in a relationship. Tensions can build up. Arguments, and especially uncontrolled anger, abuse or violence stifle good communication. Some couples may not even start with good communication skills. Some people are brought up in homes where their parents did not have talk about their problems, or if they did, they did not do so in front of their children. Some people’s parents model arguing all the time. Other people’s parents may not have argued at all.

With a solid foundation of good communication, relationship obstacles usually don’t appear so discouraging. When you feel confident in your ability to talk effectively with your partner, you become a better problem-solver. Think about the couples you know who regularly work together on improving communication. They also usually work on improving their relationship (such as by spending time together, thinking about each other’s hopes, wishes and desires, doing daily acts of consideration for each other, and so on). There is so much to communicate about communication. Let’s begin this important, ongoing conversation:

7 Effective Ways to Improve the Communication In Your Relationship

Of all the communication skills that I teach to couples, good listening is perhaps the most important. Unfortunately it is also a difficult skill to master, especially in the heat of an argument. However good listening skills can help couples avoid arguments in the first place.

Your personal interactions don’t exist in a vacuum. The society that shaped us plays a role in everything we do. Therefore, we must take this reality into account. For example, using the couple already discussed, John works as a foreman on a construction site-sometimes overseeing up to 20 men who are working for him. He is used to giving orders and getting things done as fast as possible. He also works mostly with men who are like him.

When John comes home and Tracey starts to talk with him about a problem or issue-John will often just try to solve her problem-like he would at work. He doesn’t understand why Tracey doesn’t find this useful-in fact she says to him all the time that he just needs to listen to her-she can solve her own problems once she has got everything out that she needs to talk about.

This is one example where men and women are socialised differently in society. Men tend to be socialised as problem solvers and women as nurturers-aware of their own and other people’s feelings. So when men and women talk there are often problems. This isn’t the fault of either party-just an unfortunate aspect of the culture we have grown up in!

Here’s a basic example. Let’s say that when John comes home one day he clearly states a need for alone time. Tracey should respect that boundary-just as John should respect a boundary Tracey may state, such as when she on days when she is exhausted and she really needs him to help with the children.

In a healthy relationship, both people must be able to declare their needs-and have that need respected. This especially applies to when good communication is being lost and an argument is starting to develop. Either party should be able to say that they don’t want this argument to continue. Often taking a quick “Time-Out” in these situations can allow emotions to calm down and for more rational and useful conversation to take place. 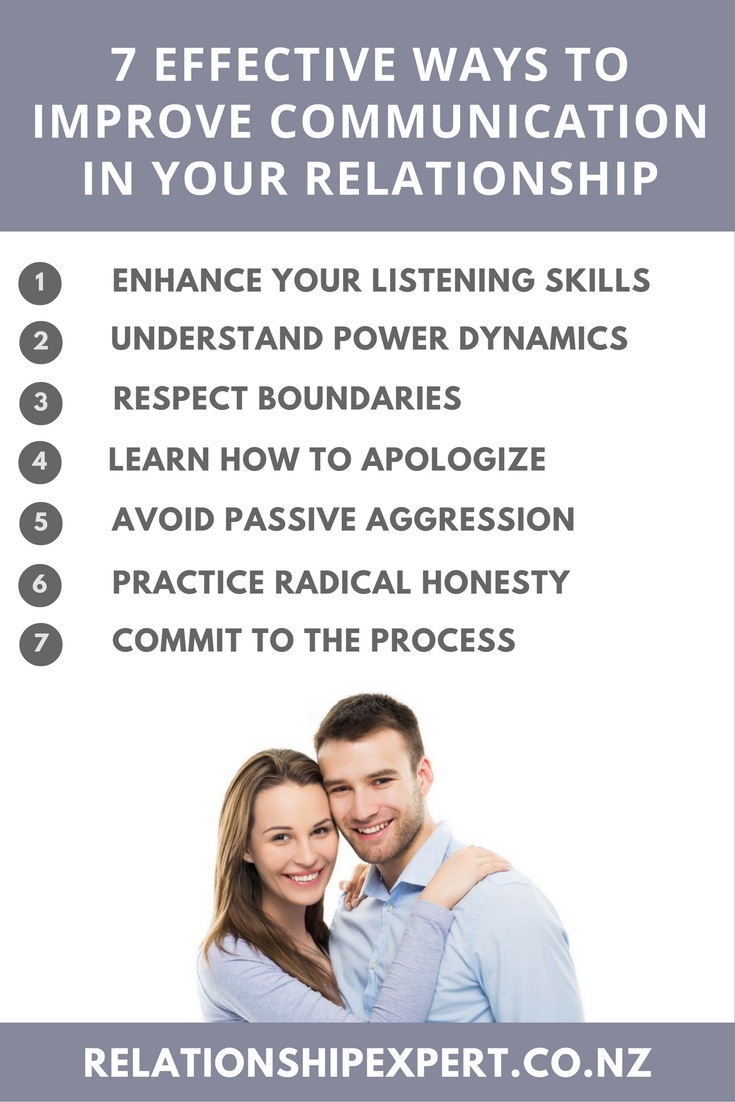 4. Learn How to Apologize

We all mess up at times. You may have hurt your partner’s feelings. His or her expectations weren’t met. Perhaps you broke a promise or forgot something important to your partner. Rather than hope that your partner forgets about this event or trying to explain your reasons for what you did, a much more powerful step is to take full responsibility for your behavior.

This often begins with an authentic, sincere apology. This can be particularly difficult for men who are socialised to believe that admitting responsibility for something or apologising for something is a sign of weakness. But in almost all cases it is exactly the opposite-a sign of maturity and strength.

As with active listening, learning to apologise for mistakes we have made is a skill that can be learned. There are many articles on how to apologize effectively-such as this article or this. However, a productive apology requires you to:

Signs of passive-aggressive behaviour include:

If you find yourself engaging in any of this behaviour, it’s time to check yourself. Commit to more honest and straightforward interaction with your partner. You may need to make a specific time to talk with him or her about the issue that is bothering you.

Sometimes the most basic step (such as talking to your partner about something that is on your mind) can be the most challenging. Saying what you really think or feel can be scary. You may be afraid that simply saying what is on your mind may lead to an argument with your partner. It often feels simpler to push down thoughts or emotions rather than risk a fight. Letting things simmer, however, can lead to distance in a relationship or to the passive aggression we have just discussed.

This is where the concept of “radical honesty” can come into play. You and your partner can choose to commit to being more open. Honesty in a relationship-provided it is not designed to hurt the other person is almost always beneficial. Remembering this and choosing to tell your partner what is on your mind is often exactly what your relationship needs at the time.

One step to make this process of “radical honesty” easier for people is to agree on a warning. Before stating a tough opinion, tell your partner you’re about to engage in radical honesty. This prepares them and can make it easier for them to hear what you are saying without them getting angry or defensive. It also provides a chance for them to set a boundary. They can declare then that they’re not ready for it. In this case you both should remain committed to the process of radical honesty and choose a better time for you both to talk.

7. Commit to the Process

Communication is not a destination. Instead it is a process of constant improvement. What may work for you and your partner to communicate better now may not work as well in a week or a year time. Instead good communication is a relationship is a journey. Commit to the journey. You get to improve yourself, of course. But you also get to strengthen your relationship. No one ever said it’d be easy but the rewards are so worth it!