It's Time To Have A Happier, Healthier and More Loving Relationship

Having a good long-term relationship without help is a huge challenge for all but the most perfect couples.

If you are in a relationship and experiencing: More than 25 years ago I made the biggest decision of my professional life.

In 1992 I graduated with a Masters Degree in Quantum Physics from Auckland University. Two years later I finished my second year working as a Patent Attorney. Despite working 60-70 hours a week and earning more money for the firm than most of the partners-I was not happy.

It was then that I knew it was time to follow my passion. I had spent the last two years successfully understanding inventions and the five years before that understanding the most the fundamental laws of nature. Maintaining my curiosity though, I wanted to understand people. Perhaps more than that, I wanted to understand myself. So I made the biggest decision of my professional career and quit my job as a Patent Attorney. I had decided become a psychotherapist.

In the 25 years since I have helped over 6500 individuals and couples to improve their lives. Many of these couples had just about given up on their relationship. Many were in the midst of struggles with anger, abuse or violence. Many were struggling to recover from an affair. After working with these couples for weeks or sometimes months, most started to improve their relationship. Their levels of anger and arguments dropped. They were talking more to each other and developing the love and trust that they had previously lost.

Whatever issue you are facing, I can help you regain a happy, healthy and loving relationship.

I have a Post-Graduate Diploma in Psychotherapy from Auckland Institute of Technology as well as a Masters Degree in Quantum Physics from Auckland University. I have been a member of the New Zealand Association of Counsellors since 2000.

In the last twenty years I have been employed as a individual counsellor, family therapist and relationship counsellor for a variety of organisations. These include Methodist Mission Northern, Richmond Fellowship, Home and Family Society and North Harbour Living Without Violence. Since 1993 I have also run almost two thousand group sessions for men who perpetrate domestic violence-making me one of the most experienced domestic violence counsellors in New Zealand.

In the last ten years I have been employed as the Clinical Manager at North Harbour Living Without Violence. I have also run a successful private counselling practice since 2000-seeing hundreds of couples for relationship issues of all types.

Over the years, I believe that I have seen a total of 7-8 counsellors. Without any shred of exaggeration, my experience with Alastair was by far the best. He was extremely helpful and he really truly did change my situation at the time completely into a positive direction. I have recommended him to many people since. I will never forget what he did for me, and all I need to do is think about him and it renews my faith in people and that they can care and make a difference and things can change.”

I maintain a wide variety of interests outside of the counselling room.

In particular, I am an active amateur astronomer, a keen chess player, a regular competitor in long distance triathlons, a kayak enthusiast and an occasional waterbiker.

As a triathlete I have completed New Zealand Ironman five times since 2009-including my most recent finish in 2015. I love swimming, cycling, running and being in nature for any reason! 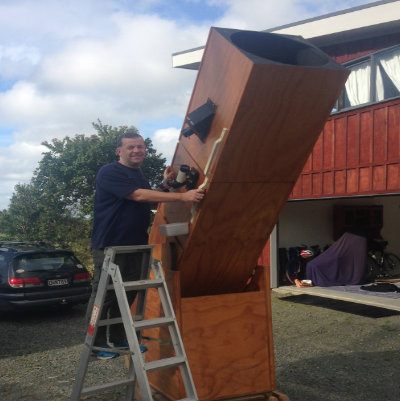 One Of My Larger Telescopes

I also love to kayak with dolphins and marine mammals as much as possible around the beautiful coast of New Zealand-and have recently kayaked with Orca, dolphins, seals and a Southern Right Whale!

On clear nights I love to use my 22.5 inch telescope or pair of 16 inch binoculars-exploring the night sky with as much fascination as I did when I was a young child.

"The Best Investment We Have Made"